Who to consult about ants on pear trees?

Hi all! In the Q&A following Linda Gilkeson’s talk Monday, someone asked about reddish ants damaging their pear tree blossoms. I have the same problem! Linda suggested contacting an expert that can identify the ants and ensure they are not an invasive species of concern.

Any recommendations for someone in the Comox Valley who could identify my ants and give advice on their management?

Lavenders Blue? Linda Pritchard’s crew may be able to help?

I found this website that could assist in identification:
https://faculty.tru.ca/rhiggins/identification_of_the_european_fire_ant_for_general_public.htm

After reading it I’m pretty sure what I have is thatching ants. The info is from a prof at Thompson Rivers - Dr Robert Higgins - perhaps he would be willing to look at a photo or a sample ant? Other municipalities around the Lower Mainland and Victoria seem much more on this with someone who will come out to look, but I couldn’t find anyone here.

It is almost certain you have thatching ants. They are very common here and can be a ‘problem’ for some plants. They also herd aphids, moving groups from plant to plant to milk the aphids for sugar. Check around your property for a mound. They also apparently have satellite colonies. 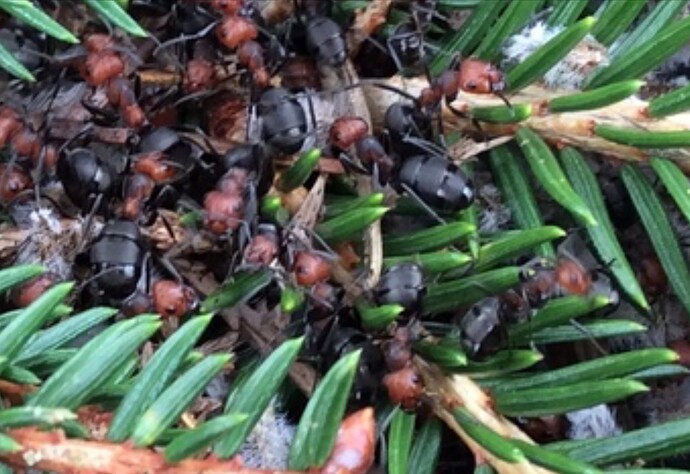 These are Western thatching ants. They have a big red head and a blackish body. They are bite and spray formic acid on the bite so it gives quite a snap!

I am the person who asked Linda the question about the ants. It sounds like we have the same type of ants as you.
As a stopgap to protect our trees until we can get rid of the ant colonies, we have used tanglefoot to stop the parade of ants up the tree. We wrapped the tree carefully so there weren’t any gaps between the wrap and the bark (a 15 cm wrap about a foot off the ground) and then applied a band of tanglefoot at the top of the wrap. We did it quite late in the day so there weren’t as many ants on the tree. It stopped the ants going up the tree and we removed the ants that were already there with a big paint brush. The tree is now ant free and we are hoping that some of the blossoms survived the ants.

Update
Well, we finally seem to have got rid of most of the ants. It took a lot of patience, and we had to try a few different tactics. We first used some of the commercial “ant killer” products sold in stores, but none of them worked.

Instead we first tried applying a daily solution of borax and sugar/honey. The ants take this back to the queen and eventually it is supposed to kill the colony. (Incidentally, for the first time ever, we had an invasion of little black ants in our house and this method worked to get rid of them within a few days.) See How to Kill Ants with Borax - A Deadly Ant Killer Recipe for more information.

Although the ant mounds were getting smaller with the the application of the daily borax solution, things were moving a bit too slowly outside for us with so we decided to switch tactics. We shovelled the top of the ant mound into a large plastic container of warm water and soap. The ants move quickly and bite so we used gloves and rubber boots with tanglefoot half way up. We then soaked what was left with a mixture of hot water, borax and soap.
This seems to have done the trick. Some ants have tried to relocate and start up new colonies, but they are easy to deal with since we catch them when they are small.